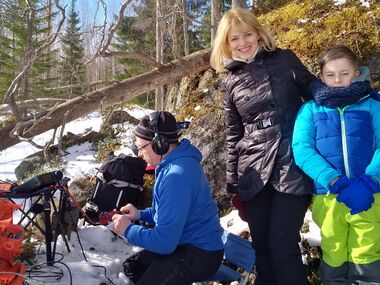 When I booked my vacation at the OH73ELK-QTH I was focused on having some holidays right in the middle of nowhere together with my 10 years old son Ole. Planning what to do I could not resist to have a look on spots to activate with my radio gear. Nowadays in all dense populated areas and even a bit outside you are faced to any kind of disturbances on the radio bands. Beside the chance to work from an area that would be almost free of man-made or any industrial noise I became interested in if there would be any spot to activate

Yesss! After checking the WWFF-database and having a look into maastokartat.fi   I found an area that never  has been activated before. Not too far away from Vuokalansaari  which is the OH73ELK-island  Haukiniemi (OHFF-0091) was waiting for its first radio amateur to work from.

According to the maps available it would have been quite a journey because of the lakes the area is full of. My good old Land Rover would probably make it half the way and I do not fear to walk quite a distance carrying my radio-gear. I have done it already a few times and with my pair of snowshoes it should be possible to make it even if there are no roads or trails. Meanwhile I told Raisa and Alex about the WWFF-area and my intention to

activate this spot. To my surprise they checked the area and sent me some pictures from there and they became very interested in to join me on that trip. Very good  somebody else got infected by the flora & fauna-virus, I guess? Coming closer to my dates of travel the weather conditions moved more and more into focus. Temperatures at daytime were already well above zero in Finland.

There was a lot of snow in the season before and now it started thawing everywhere. Well  also a Land Rover has limits however the lakes were still frozen. So another option for our planned activity going to the nature reserve by snow-mobile! My host already contacted their local friend Niilo. He promised to help although he did not understand our plan of course. When arriving in Finland I was prepared for everything. Leaving the area around Helsinki there was not a single sign of the last winter left.

Coming closer to Savonranta winter was returning. After arrival the first thing we did was to build a snowman and having a snowball fight. But it was quite obvious that the ice on the lake was in a critical condition. On Saturday evening we prepared everything to start on Sunday morning for the first ever activity from OHFF-0091! The ride to the point where we would start over the ice was not too long but slippery. Fortunately we had an all-terrain vehicle. To our surprise Niilo did not prepare only the transport over the lake he also lit a campfire on the lake and started ice-fishing.

Finally our activity was equipped with all conceivable amenities. Or do you expect having a barbecue on the ice?

My standard-equipment, the ICOM IC7000, the AH4-tuner and a 40 Ah-battery was set up fast to start the activity. A 10m vertical wire antenna supported by a fiberglas-mast was placed nearby. Only 20 minutes after we arrived the first CQ went to the air. Signing OH4/DL2VFR in telegraphy the long awaited first activity from this spot became true. After a short while OH73ELK/p became active in SSB. After a few hours we

filled the logs with more than 130 stations on different bands. Even my son had a great time there. Driving over the ice on a snow-mobile and ice-fishing is not a normal thing for a young boy from northern Germany.

I was really pleased that YL Raisa had so much fun activating a WWFF-area. Maybe thats not the last oneThe area around has still some OHFF-spots that have been only little activated. And there are even still unnumbered nature reserves.

P.S. here is a short movie from YL Raisa about our FF-pedition !